Git is a Version Control System (VCS) for source code created by Linus Torvald (the creator of Linux). It allows to share and collaborate on code efficiently. It somewhat has a high barrier to entry especially because it's packed with feature. However you can learn a few basic terms and commands to use it in an easy way.

In opposition ot other VCS (Subversion for instance), Git is distributed. It means there's no central server and everything you do is happening on your local machine. It also means you can work on your code locally without being connected to the internet and syncronize with a remote repository later.

Here's a list of usual terms you will enconter in the guide, you can refer to it later. 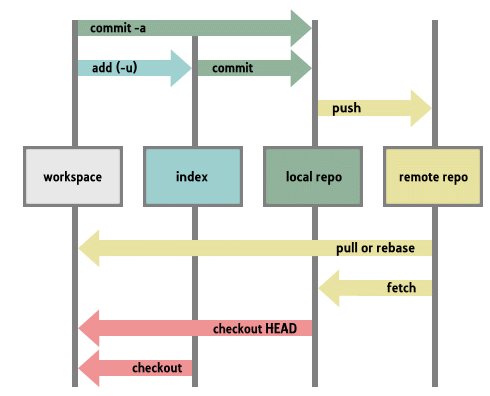 The usual workflow when using Git consist of the following sequence of commands:

Let's break down every command.

This retrieve a remote repository on your machine, downloading the complete history of every branches locally. It's actually a wrapper for other commands:

You've made some changes to some file in your repository and now you are ready to settle those in a commit.

The first step is to break down your changes in multiple commits if this make sense. For instance, you added feature-1.c and fixed a bug in main.c. You'd want to have two separate commits so it's easier to review by your peers. You can then do the following:

The result will be two separate commits, each one contains the corresponding patch.

Those commands let you interact with the remote repository (c4science). You can either pull the new commits from the remote or push your new commits to the server.

It's always a good idea to pull first because Git will not let you push if there are new commits on the server that you don't have on your local copy. You are then in charge of integrating those new commits by merging, and potentially fixing some conflicts.

Git has a lot of usefull commands. One of the most important is git status. It will always tell you what to do.

If your working copy has no change and is up to date, here's the output of git status

If you have uncommited and unstaged changes in your working copy,:

Git tells you that there are unstaged changes, that you can add them to the staging using git add or the shortcut command git commit -a.

Now if you have a file that is not tracked by Git:

Git tells you you have an untracked file, Simply run git add feature-2.cto add the file to the staging area.

When you pull / merge and Git cannot merge the changes, you'll end up with a open conflict. git status will tell you what to do:

The conflict is in the conflicted file, there are two parts, the local part of the file and the remote part. Separated by the equal sign, in example:

Simply edit the file, and manually choose which side to keep, and if needed keep some part of the other file, for instance here's my resolution to the conflct, and the commands to fix it.